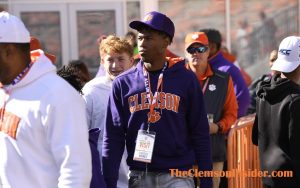 A talented running back prospect from Alabama returned to Tiger Town this past weekend as an official visitor.

After unofficially visiting Clemson for the Syracuse game on Oct. 22 while accepting an offer from the Tigers, Jamarius Haynes of Handley High School (Roanoke, Alabama) returned to campus for his official visit last weekend.

“I enjoyed everything,” Haynes said of his official visit in an interview with The Clemson Insider. “It was a great visit all round. Even the hotel they took us to was great too.”

Haynes made his way to Clemson with his parents, little brother and little cousin.

“They enjoyed it very much,” he said. “My little brother didn’t want to go.”

Haynes’ player-hosts during the weekend were Clemson running back and Domonique Thomas, also from Alabama.

“It was nice man,” Haynes said of being with Thomas. “He showed me around. We went out into town, around town a bit.”

The best part of the weekend for Haynes was going to Dabo Swinney’s place for dinner on Saturday night, where he could be with other recruits and current Clemson players, as well as coaches and their families.

“Really just interact with everyone, all the other guys that have been on official visits and coaches and their wives and families,” Haynes said of the highlight of the official visit. “You just have to sit around and meet them and talk to them, get closer to them.”

Haynes (6-0, 180) feels his relationship with Clemson’s staff has “definitely” grown stronger over the weekend and said the overall message the coaches gave him was “You can’t go wrong if You go to a place like Clemson. ”

Clemson running backs coach CJ Spiller traveled to watch Haynes play in his Class 4A second-round playoff game against TR Miller (Brewton, Alabama) on Nov. 11 — when Haynes put on a show, rushing for 231 yards and four touchdowns scored a 27-14 win.

Commenting on what he heard from Spiller during last weekend’s visit, Haynes said: “He just told me he liked me a lot.”

While Haynes has no plans to become an early enroller, he said he will likely sign with the school of his choice during the early signing phase in December.

Clemson was his first offer, and he’s since added offers from Washington state and western Kentucky.

Where are the Tigers with him right now?

“My other two offers are pretty far away, so our relationship wasn’t able to build like Clemson did,” he said. “Well, Clemson is definitely up there now.”

In terms of what sticks out to him the most when thinking about Clemson and possibly being a part of the team, Haynes said, “I’m just thinking about everyone in the program.”

“It’s a very great program,” he said. “I’ve been to this place maybe three times. There was never a bad energy around him… The coaches have always treated everyone very well.”

Show your tiger spirit on GameDay or any other day. Get great GameDay jewelry at Clemson Variety & Frame.