Six of the top 10 most dangerous cities to walk in are in the Southeast, and four of those are in Florida, according to a report by an advocacy group campaigning for better planning and safer transportation policies.

And the problem has only gotten worse in recent years, Smart Growth America said in its recent Dangerous by Design report. As motoring eased during the COVID-19 pandemic, the number of pedestrian fatalities hit a new high nationwide in 2020, according to federal data. Since then, other data shows 7,485 people were killed on foot in 2021 — the highest number in 40 years, the organization reported.

“This epidemic is getting worse and worse because our country’s roads are dangerous and designed primarily to move cars quickly, at the expense of everyone’s safety,” the report said.

Florida cities appear to be the epicenter for pedestrian accidents. The group noted that the Daytona-Ormond Beach metro area had a dubious reputation for being the number one death spot in the country.

It was followed by the Tampa Bay region, which ranked fourth nationally; Jacksonville, sixth; and the Orlando area at number eight. Other US cities included Memphis, at number three; Charleston, South Carolina, ranked fifth; Albuquerque, New Mexico, ranks second in the nation; and three California cities — Bakersfield, Stockton, and Fresno — in seventh, ninth, and tenth place.

No metro area is improving, Smart Growth America said. The mortality rate worsened from 2016 to 2020 compared to the rate of the previous five years.

The report did not address why Florida has so many dangerous spots. However, it found that many more pedestrian deaths appeared to occur in low-income urban areas, partly because some of these areas have major thoroughfares running through them, forcing pedestrians to cross congested and high-speed thoroughfares. 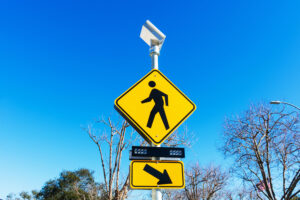 A report this week in the New York Times suggested that other developed countries have taken big strides to make streets safer for pedestrians and cyclists, but the United States has not. The article states that data from the Organization for Economic Co-operation and Development shows that the number of deaths from traffic accidents has decreased significantly around the world over the past 30 years. In the US, however, the rate has fallen only slightly and has risen in recent years.

Some countries have made efforts to incorporate protected bike lanes, roundabouts at intersections, lower speed limits and have seen more vehicle systems with automatic braking when pedestrians are detected nearby, the report said.

In the United States, however, the focus has long been on speed, larger SUVs and trucks, and moving traffic quickly without regard for walkers, runners, bikes or motorcycles, both reports say.

As many Floridians have complained, Florida has some of the highest auto insurance rates in the country. And pedestrian accidents are indeed a reason, said Mark Friedlander, communications director for the Insurance Information Institute.

Other factors behind the rates are high accident rates; higher repair costs; fraud schemes, including staged accidents; Storm; and increased involvement of lawyers, leading to more litigation, he said.

The Smart Growth report argued that policymakers could do better to address security issues.

“Too many authorities and decision-makers involved in building our transportation system have been sleeping at the crossover, believing (or just hoping) that safety will improve while only making incremental changes to a deadly status quo,” the concluded Report.

Receive automatic notifications on this topic.