The US Department of the Interior oversees public lands, national parks and wildlife sanctuaries, and has significant influence over the nation’s environmental policies.

Here’s a look at four previous men who have led the department in less than admirable ways. They offer lessons when we choose our political leaders.

Columbus Delano was President Ulysses S. Grant’s secretary of the interior from 1871 to 1875, the figurehead of American genocide. Before that he was an anti-slavery congressman. Inside, he pioneered what later became the National Park System by putting Yellowstone aside.

But along with Civil War hero Phil Sheridan, he championed the Plains Indians’ kill-and-conquer policy by wiping out bison. Tens of millions of tribal food, cultural and spiritual staples were wiped out to make way for white westward expansion.

Delano made the bison extinction a de facto federal policy. It hastened the enthusiastic, then 250-year-old attempt to wipe out the American Indians.

Columbus Delano was hardly the only senior government official to both encourage and encourage genocide athabascocide (Sorry, but I think I just made that word up). But he gets special bonus points for being named after the founding father of American genocide, Christopher Columbus.

Have you ever wondered how the term “Fall Guy” came about? Some say it honors or dishonors Albert B. Fall, a centerpiece in President Warren G. Harding’s monumentally corrupt administration.

Fall, an Army veteran and career politician, became one of New Mexico’s first two senators after gaining statehood in 1912. He joined the Ohio Gang that propelled Harding to the presidency in the 1920 election. President Harding transferred Naval Petroleum Reserve sites in California and Wyoming from the Navy to the Interior Department from Fall.

In April 1922, Tue Wall Street Journal (damn journalists!) discovered evidence of bribes from one of them, Edward Doheny. The “Teapot Dome Scandal”, so named after the Wyoming oil location, spread.

Fall was charged and convicted of conspiracy and sentenced to one year. But while the “case guy” wasn’t the only one involved, others, including Harding and Attorney General Harry Daugherty, were skating.

While James G. Watt’s tenure at the Home Office took a sharp turn in favor of industry, his real downfall came with a few ill-intentioned remarks and really bad jokes.

Watt was a deeply religious advocate and all for conservative purposes. When he joined Ronald Reagan’s inaugural cabinet in 1981, he alarmed some moderate Republicans in California and Florida by endorsing offshore oil and gas drilling. And he enraged most Democrats by pushing to relax endangered species protections and expand coal mining.

But what drove him out of office was his tendency to say stupid things. Watt predicted the Horde on January 6 when he said, “If the environmentalists’ problems can’t be solved in the jury box or at the ballot box, maybe the cartridge box should be used.”

When asked about his obligation to protect nature for future generations, he said, “My responsibility is to follow the Scriptures that tell us to occupy the land until Jesus comes again.”

Watt canceled a July 4 concert on the National Mall because he said the Beach Boys were drawing “the wrong element” as headliners. First Lady Nancy Reagan, a big Beach Boys fan, disagreed. The concert started again.

It all ended after a decidedly unfunny attempt to poke fun at the affirmative action laws, describing the diversity among members of a low-level home affairs committee: “I have a black man, a woman, two Jews and a cripple. And we have talent.”

Watt’s career as a civil servant was over. But in 1996 he pleaded guilty to misdemeanor and obstruction of justice in a case involving lobbying at the Department of Housing and Urban Development. He paid a $5,000 fine, did 500 hours of community service and served a five-year probationary period. 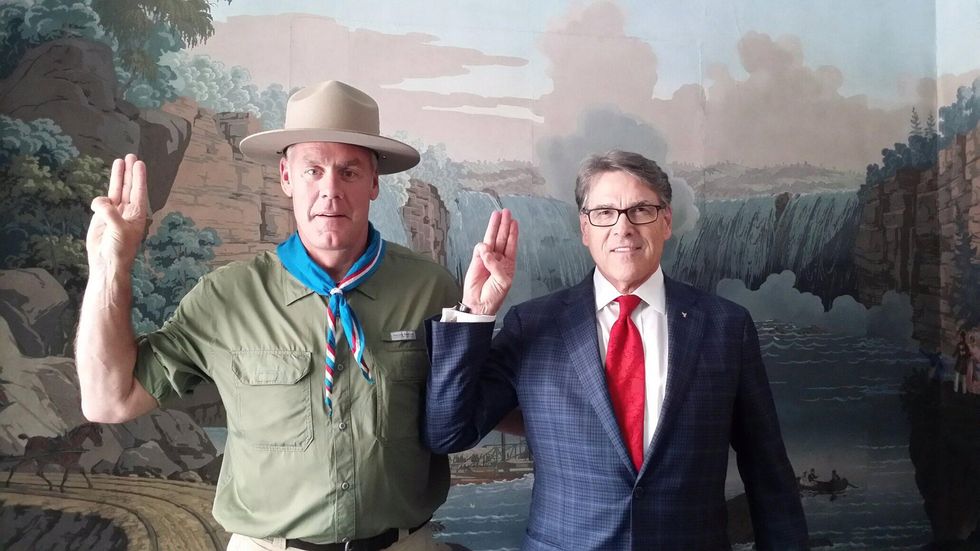 Zinke hardly stood alone as a dubious cabinet pick for the Trump administration, but his appearance at a Boy Scout Jamboree in an oversized Eagle Scout outfit said it all for me.

His resume also includes college football, the Navy Seals, a state representative, and a tenure as Montana’s sole member of Congress from 2015 to 2017. President Trump named him his first Secretary of the Interior. Like Watt, he angered Democrats and environmentalists while accommodating fossil fuel interests. The day after he was sworn in, he rode a National Park Service horse to work.

While in the State House, he underwrote concerns about the potential for global damage from climate change. But in a 2014 debate for his seat in Congress, he said, “Climate change isn’t a hoax, but it’s not a proven science either.”

Zinke dismounted from the horse he had been riding and went to work to overturn a last-minute Obama ban on leaded hunting ammunition; Undermining the Endangered Species Act and the Migratory Birds Treaty Act and more.

He got into trouble once or twice for alleged misappropriation of department funds, but the Inspector General of the Interior eventually found no serious wrongdoing.

After Hurricane Maria devastated Puerto Rico’s power grid, a two-person company from Zinke’s hometown of Whitefish, Montana, won a $300 million contract, although they have never completed a $1.5 million contract would have. Whitefish Energy’s stench was so strong that Puerto Rico canceled the deal. Zinke denied any involvement, but even loyal Republicans kept him at arm’s length thereafter.

Here’s the icing on the cake: He said climate change didn’t play a role in California’s horrific 2018 wildfires, but “environmental terrorist groups did.”

Trump announced that Zinke would be leaving Interior at the end of 2018. In 2019, he launched a new venture in — wait for it — crypto.

So let’s put on our best face: We haven’t had a genocidal killer running the Home Office in 150 years.

Peter Dykstra is our weekend editor and columnist and can be reached at [email protected] or @pdykstra.